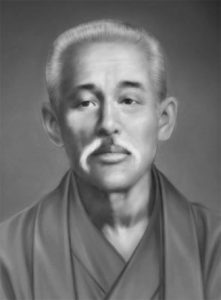 Master Higashionna began his study of the Ryukyu Ti (Ryukyu Hand) of Naha as a young child in his homeland. As a young man of fifteen he became a sailor on the Shinko-Sen, travelling the trade routes to China. It was on one of these expeditions that he came in contact with a renowned Chinese martial artist named Ryu Ruko and received instruction in the art of Southern Chinese Dragon Boxing. After a large number of years ( Between 15 and 30, history is vague and accounts vary) he returned home to Okinawa. Taking his acquired knowledge and expertise, he incorporated what he had learned in China and after much study combined what he thought were the best of Ryukyu Ti and Southern Dragon Boxing into the style that became know as Naha Ti. One of the katas Master Higashionna brought back from China was Sanchin. His Sanchin was so powerful that sometimes he would permit four men to attempt to push him out of his stance, but they would never succeed. Master Higashionna’s vision was to take karate from just technique to an art, and to teach large groups instead of individuals. That way karate could be taught in schools and police academies. As his vision came about his fame grew and he became known as the “Fist Saint”. One of Master Higashionna’s top students was a man named Chojun Miyagi, the founder of Goju Ryu Karate 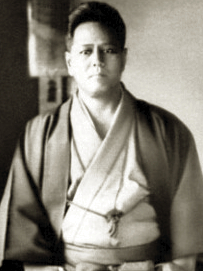 Born on April 25, 1888 in Haigashi, Naha, Miyagi Sensei came to inherit the fortune of one of the wealthiest families on Okinawa. Thus independently wealthy, he was able to devote his life to the exclusive study of the martial arts. He began his training at the age of eleven under karate master Aragaki Ryuko and in 1901 Chojun Miyagi was introduced to Master Kanryo Higashionna. Under Master Higashionna students would learn only one kata suited to their temperament and body type, becoming highly proficient. Chojun Miyagi however was able to learn all aspects of Naha Ti. He was the only student of Master Higashionna to learn all the katas of Naha Ti. Because of his great wealth Chojun Miyagi was able to house Master Higashionna and so he remained in his constant company. Miyagi Sensei studied under Master Higashionna for fifteen years until the Masters death. After his masters death, Master Miyagi journeyed to China twice to study and collect further teaching and literature on the martial arts. A pioneer in internationalizing karate, he also travelled to mainland Japan and Hawaii to spread its doctrine.

It was during a demonstration on the Japanese mainland by Master Miyagi’s senior student Jinan Shinzato, that the styles name came into question. Back then in Japan all recognized styles had to have a name. Jinan Shinzato was unable to give an accurate reply when he was asked so upon his return to Okinawa he consulted with Master Miyagi. Master Miyagi came up with the name Goju Ryu taken from a line of the Bubishi, a record of the eight precepts of Chinese Kempo. Go Ju appears in the sentence, “Ho Go Ju Dont” ( the way of breathing is hardness and softness), describing the hard and soft of his style. Thus Goju Ryu was the first style of karate not named after the city of its origin.

In 1933, when Dai Nippon Butoku Kai (the largest martial arts organization recognized by the prewar Japanese government) was established, Master Miyagi, as the representative of the Okinawan martial artists, presented his article, “An Outline of Karate-do”. As a result of his presentation karate received formal recognition as a Japanese martial art. Master Miyagi himself was awarded the title, Karate-Jutsu Master, the first master in the karate world so designated.

Although Master Miyagi’s command of the art was profound, his greatest achievement was the organization of karate teaching methods. He introduced preparation exercises, supplementary exercises, Hookiyu Kata (unified kata), Kihon kata (basic forms) and relaxing exercises, all truly epoch-making developments in karate teaching. In addition, his classes in junior high and police schools helped redefine karate’s public image. At that time, public opinion held that karate would make a person poor or fond of quarreling. Master Miyagi’s work, however, disproved these myths and presented a more accurate picture of karate as a martial art and physical exercise.

Master Miyagi was called the last great samurai warrior of Ryukyu (Okinawa) and held the title of Bushi. Master Miyagi died of a heart attack on October 8, 1953 at the age of 65 and because of his sudden death no official successor was named. After Master Miyagi’s death various schools of Goju Ryu were opened by his senior students, Seiko Higa teaching at his Shodokan Dojo, Meitoku Yagi at his Meibukan Dojo, Master Seikichi Toguchi at his Shoreikan Dojo, and Ei’ichi Miyazato at his Jundokan Dojo. 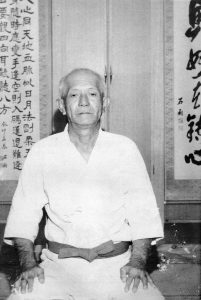 After the death of Master Higashionna. He continued his study of Naha Ti with Master Chojun Miyagi. At the age of 21, he began teaching elementary school and later worked with the Okinawan police. In 1932 he decided to make karate his full time profession and opened a dojo in Kumoji and was only one of three authorized dojos from Master Miyagi. Master Seko Higa also spent two years teaching in Indonesia and when he returned to Okinawa was awarded the rank of Renshi or seventh dan from the Butokudai.

After the second world war Master Higa came to live with Master Seikichi Toguchi, one of his earlier students, and with the help of Master Toguchi opened the Shodokan Dojo in Okinawa. Many considered Master Higa the best technician of Goju Ryu. He passed away on April 16, 1966 at the age of 68. 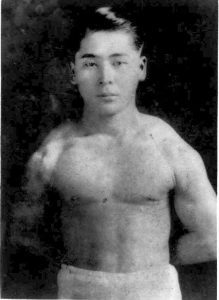 Master Seikichi Toguchi was born on May 20, 1917 in Naha City, Okinawa. As a young boy his father trained him in the basic techniques of Okinawan Ti. In 1930 at the age of 13, Master Seikichi Toguchi began his life long study of Goju Ryu karate at the dojo of Master Seko Higa and later under Master Chojun Miyagi as one of his principle students. He studied under Higa Sensei for over 33 years and under Miyagi Sensei for more than 25 years, making his karate education very unique. Master Toguchi was fortunate as Master Miyagi was a personal friend of Master Toguchi’s father and so he paid many visits to the family. At these times the conversation most always turned to karate and the discussions would go on until the early hours of the morning.

Master Toguchi continued his full time study of karate until the beginning of World War II when he was drafted into the army as an electrical engineer and stationed in Sumatra, Indonesia. In 1946 he returned to Okinawa to find a devastated people and homeland. Sensei Miyagi had lost three children and one of his senior student, Jinan Shinsato. Higa Sensei had lost his wife. Master Miyagi began teaching at the police academy and Higa Sensei moved in with Toguchi Sensei. At this time Higa Sensei also played match maker and introduced Master Toguchi to a young girl named Haruko, soon to be his wife.

In 1949 with the help of Toguchi Sensei, Master Higa opened up the Shodokan Dojo and Toguchi Sensei was appointed Shihan. Before his death Master Miyagi passed on all his advanced kata and teachings to Toguchi Sensie, one of the more important being kaisai no genri. This explains how to unlock the hidden techniques of the koryu kata. In 1953 after the death of Master Miyagi his senior students formed the Karate-Do Goju Association, with Master Meitoku Yagi as Chairman, and Master Seikichi Toguchi was Vice Chairman.

In 1954 Master Toguchi opened up the first Shorei-kan Dojo (House of politeness and respect) in Koza City, Okinawa. The Shorei-Kan dojo was very close to the American Military base and the Americans showed a great interest in the martial arts. With an increasing western population in his dojo Master Toguchi found it necessary to devise a progressive teaching method to over come the language barrier. Expanding on Master Miyagi’s vision, Master Toguchi further developed a system of progressive kata, with added bunkai kumite and kiso kumite to help explain application of the kata. Many of the early pioneers of Okinawan karate in the US studied with Master Toguchi.

In 1956 the Okinawan Karate-Do Federation was formed and Master Toguchi was installed as a member of the board of directors. By 1960 Toguchi Sensei decided to move to mainland Japan to spread the art of karate and Shorei-Kan Goju Ryu. During the coming years he would move between Okinawa in the winter and Tokyo in the summer months. He first practiced outdoors at the Hikawa Shrine where he developed the kata Hakutsuru. In 1962 a second Shorei-Kan dojo was opened in Tokyo, while the first Shoreikan dojo in Okinawa served as the Hombu (Headquarters) dojo.

In 1968 Master Toguchi sent Ichiro Takahata to the US as the representative of Shorei-Kan for the state of Oklahoma. Over the following years Master Toguchi and his wife Haruko Toguchi travelled numerous times to the US.

Master Toguchi passed away at the age of 81 on August 31.1998. He was the last living Okinawan master to receive the title of Bushi a title also held by his teacher Master Chojun Miyagi. He touched the lives and hearts of all his students and his spirit will touch the lives and hearts of generations of students to come. After Master Toguchi’s passing Shorei-Kan was headed by his wife Kancho Haruko Toguchi in Okinawa, and a committee of Senior Black Belts. Master Toguchi left behind a strong organization that has spread through out the world and with his spirit, the Instructors of today will continue his vision. 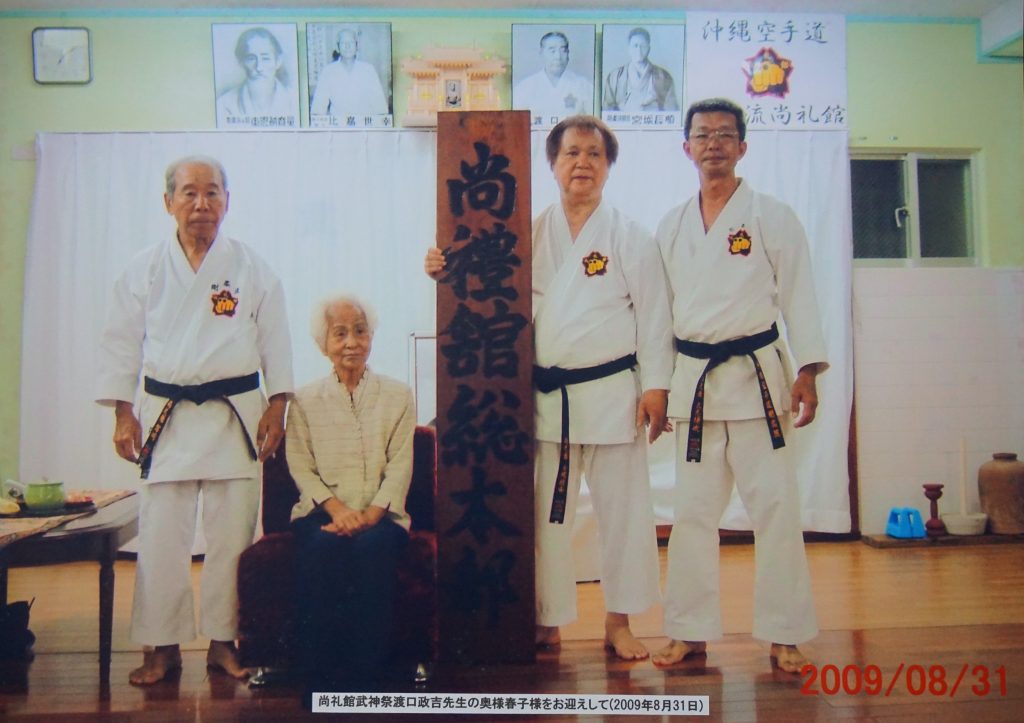 Early in 2001 Mrs. Toguchi returned to her native home of Okinawa and brought the Shorei-Kan Hombu (Headquarters) Dojo back to it’s origonal base in (Koza City) Naha, Okinawa. On August 31st, 2004 Mrs. Haruko Toguchi Kancho, wife of the late Master Seikichi Toguchi took retirement as the head of the Shorei-Kan. She returned to her home in Okinawa to enjoy the warm sun and to be with her family. She remained as a senior advisor to the Shorei-Kan until her passing.

On June 22, 2012 Mrs. Haruko Toguchi passed away at her home in Okinawa. In 2019 Master Seiji Urasaki also passed away. In October of 2121 Master Bokuyasu Kinjyo officially retired and is now senior advisor to the Shorei-Kan. Master Hirotsugu Kushi has taken over as both the Kancho and Chief Instructor of the Shorei-Kan Hombu Dojo in Okinawa. 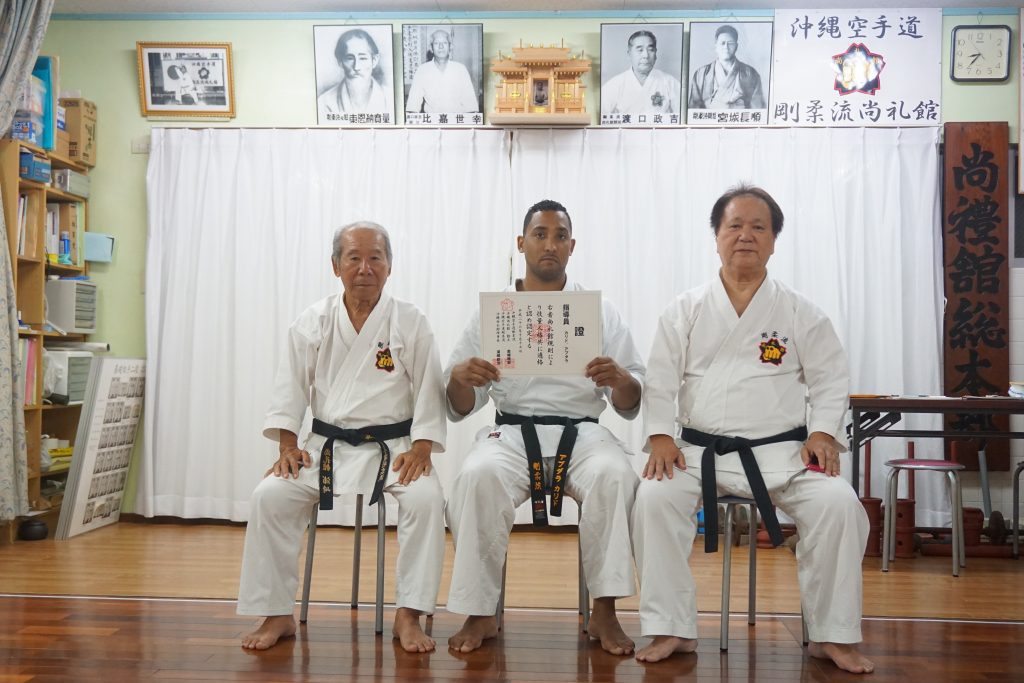 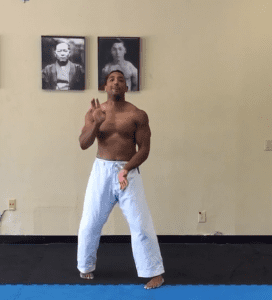 The following are his achievements:

Started Judo/jujutsu and Muay Kickboxing at age 17, Entered Karate path at age of 19, Became a student of Mr. Tom Haggerty of Goju Ryu until his acceptance into the Shoreikan Hombu Dojo Okinawa, Became a (Godan) Shihan of Goju Ryu Shorei-kan at age 34 (Abdalla Sensei was the youngest foreign teacher with this title).